One of the Recode amendments I proposed at the last Council meeting has drawn some interest and likewise some misunderstanding. Therefore, I’d like to breakdown some of the key points of the Established Neighborhood Amendment and clarify some misunderstandings about West Hills.

West Hills has a very active neighborhood association, both in terms of community gatherings and a shared commitment to maintaining a healthy lifestyle. In fact, the neighborhood recently received statewide “healthy neighborhood” recognition by Governor’s Health and Wellness Foundation. West Hills Elementary School is located in the heart of the neighborhood, where 52% of students receive free or reduced lunch and approximately 100 of the 750 students speak English as a second language. The assertion that this neighborhood is solely comprised of a certain type of resident is simply not accurate. West Hills is a welcoming, engaged, hard-working and diverse community — one that I’m proud to represent.

The EN Amendment
To clarify, the EN amendment did not specifically single-out or exclude West Hills, or any other neighborhood, from having Accessory Dwelling Units (ADUs). Rather, the amendment made a change to a zone under Recode called EN or the Established Neighborhood zone. Our city’s current zoning ordinance has examples of EN zoning in Holston Hills and Old Westmoreland. This zone is a neighborhood led process, meaning that neighborhoods must apply for this type of zoning.

The EN zone treats duplexes differently than in other residential zones as duplexes are not allowed in EN under Recode. My amendment added an option for the neighborhood to select whether or not to allow ADUs as well. It is important to note that neighborhoods have the option to limit ADUs only when they apply for and receive EN zone status.

Background: West Hills Zoning
Why do some neighborhoods, like West Hills, want to have an option to decide if ADUs and Duplexes are a good fit for them? The answer is infrastructure.

Like many neighborhoods, West Hills has been dealing with narrow winding roads and lack of sidewa 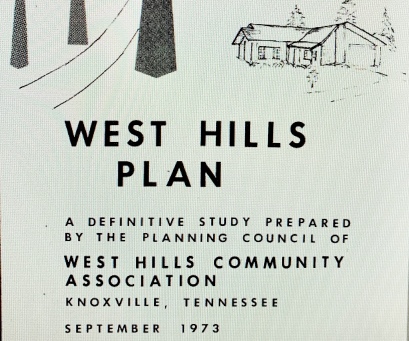 lks for a very long time. In fact, in September 1973, The West Hills Community Association published a study of land use in the neighborhood, following a directive from Knoxville City Council. The purpose of the document states: “westerly growth of the city in recent years has created conditions alarming in scope, with no apparent policy by MPC and City Council to provide permanent solutions, and yet those responsible have continued to encourage and approve intensive development in this same section of the city.” According to the study’s introduction, the document was created when a new multi-family development prompted community concern over traffic, street infrastructure, school conditions, flood control, and proper zoning policies

West Hills sought and obtained R1-E zoning in 1985 with the passage of 8-H-85-RZ. One could argue that almost 40 years ago, life was different and our perspective on zoning wasn’t the same as it is today. However, only six years ago, another second district neighborhood asked for R1-E status which indicates that the zone is neither obsolete nor outdated. On March 5, 2013, Forest Heights, was granted R1-E zoning in R-77-2013. Consider this quote in the 1973 West Hills study regarding the infrastructure in the neighborhood, “The West Hills subdivision was originally a quiet, peaceful area. The streets were laid out over and around hills in a curving and random fashion without regard to carrying voluminous traffic or high-speed vehicles.”

This is why the West Hills neighborhood and other neighborhoods have been vocal about zoning changes, they simply want a zoning structure that their neighborhood’s infrastructure can support.

One thought on “Exploring West Hills and the Established Neighborhood Amendment”

This is a text widget. The Text Widget allows you to add text or HTML to your sidebar. You can use a text widget to display text, links, images, HTML, or a combination of these. Edit them in the Widget section of the Customizer.